Managing in the White Space

A few years ago, I was given the task of improving an internal process at my company. Before this assignment, I had successfully managed groups of ten-to-twelve people: Unix administrators, web infrastructure experts and internet security technicians.

But I managed them—I had positional authority over them. There was a natural inclination to do what I would tell them to do. (That’s not why I was successful, but it helped in getting things done.)

In this new organization chart, however, there was this blank white space under my name: I had no staff, no people working for me. There was no one to tell, and yet I still had to get things done.

To make things more interesting, I had no authority over the various groups or interests that would need to cross organizational boundaries and change to improve this process. (Yes, the authority/responsibility ratio was that out of balance.) Most of the changes that would need to take place would happen in-between the groups that collectively made up this process. And on the organization chart, there was lots of blank white space between these groups that needed to work together.

I quickly discovered that I was in a place I’d never been before. I called it the “white space” of the organization. 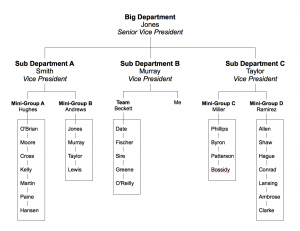 White Space is the area between groups in an organization. With no team (staff) and no title (positional authority), you’ll have to develop some new techniques to get things done.

When you have a title and a team, it’s usually pretty easy to tell everyone the goal and get full support. In this case, being successful can be as easy as pointing them in the right direction and turning the team loose.

Without a team and a title though, selling becomes much more important. Why should Ramirez and Mini-Group D spend time on my project? What’s in it for Ramirez? What’s in it for the team? Am I going to make their work easier? Is it going to help accomplish some goal that Ramirez or Taylor (Sub Department C) set?

Communicating the value and answering the question “What’s in it for me?” becomes super important. And there’s lots of room to get creative in this area.

Hughes and Mini-Group A aren’t really motivated to help you achieve your goal. Let’s face it, they’re just not. After all, they have their own priorities, workload and direction. You don’t even share the same management hierarchy, so you can’t rely on your boss (Murray) to lean on her boss (Smith) to get support.

You did a great job selling them on the need for their assistance, but you just can’t get Hughes to spare enough time/effort/resources to get your job done. Can you front-load the benefit? Can you arrange the project so that something quite valuable to them occurs quickly? What’s their pain and can you take it away or lessen it early in the project?

Providing the value early in the effort can be an important element in obtaining the cooperation you need. Again, creativity counts!

Who gets credit for a project’s success or benefits is frequently a real motivator. Can you redirect the lime-light to Miller? Can you help Ramirez get some exposure to upper management?

Utilizing this strategy requires trusting your boss (Murray) and being willing to sacrifice some laurels for yourself to get something done. Not everyone is comfortable with this strategy.

Managing in the white space of an organization doesn’t have to mean doing everything yourself or struggling to get things done.

It does mean that you might need to gain some new skills and utilize some different techniques to ensure that even without a staff or a title, you can still be successful.

Readers, what do you think? Do you find yourself in the “white space” of your organization? Have you ever tried selling when telling wasn’t working? What other skills have you found useful?