Acting on a good idea 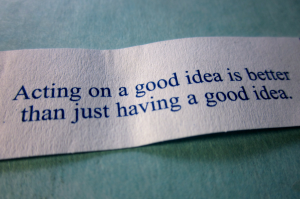 Earlier I mused on suits, haircuts and good ideas and opted to support “what’s between the ears”, those brains, smarts and ability to execute.

A day or so later my family were eating Chinese takeout when we got to the ritual of reading those little slips of paper you find wedged in fortune cookies. My son’s read:

And of course I grabbed it for this blog post.

Working in a local technology incubator, I see it quite a lot: The smart startup founder with a really great idea (and maybe even a client) who is missing a technical co-founder. There can only be so much “acting on” that great idea before it gets totally stuck by lack of development.

Or even worse, the armchair entrepreneur who hears of a startup idea that’s making progress (because someone acted on it) and says “I had that idea five years ago; should have patented it.”

No, you should have acted on it. Execute! Carry it out! Put it into effect! Follow up!

This “fortune” is akin to Edison’s oft-repeated phrase “Genius is one percent inspiration, ninety-nine percent perspiration.”1 And many times we can’t recognize the good ideas until they’ve suffered through some of that perspiration.

So what are you waiting for?

This entry was posted in Leadership, Other Thoughts and tagged execution. Bookmark the permalink.