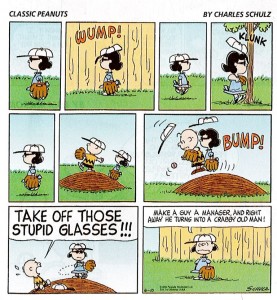 Make a guy a manager, and right away he turns into a crabby old man!

I’ve been a bit crabby at work recently so when I saw this classic Peanuts strip from June 13th, 1965, I had a flash of insight into my own situation.

Lucy, wearing dark shades, walks first into a fence (wump!), then into a tree (klunk!) and then finally, up the pitcher’s mound and into Charlie Brown (bump!) at which point Charlie Brown tells her to “Take off those stupid glasses!!!”

Lucy complies and heads out to her position in the outfield where she jumps to the conclusion that when you “make a guy a manager”, “right away he turns into a crabby old man”.

It’s not being a manager that makes me crabby, but the repeated wumping, klunking or bumping into things.

I get particularly crabby when the wumping, klunking or bumping isn’t necessary.

Now Charlie Brown’s raised-voice response may not be fully appropriate, but his directions certainly are. “Take off those stupid glasses!!!” are great instructions for members of your team who put something in the way (or allow something to get in the way) to impair their performance.

Good managers identify and remove roadblocks for their team and are aware of “too-dark shades” or other reasons that block our teams’ chances to perform well. Sometimes it’s obvious (see Lucy above) while other times it might take some effort, both to identify the reason for the wumping, klunking and bumping and to convince your “Lucy” to take off the stupid glasses.

Managers, does anyone on your team need their dark glasses taken off? Where’s that wumping and klunking sound coming from? Take the initiative to let them know what they need to do to improve—and don’t be crabby doing it.

This entry was posted in Management. Bookmark the permalink.