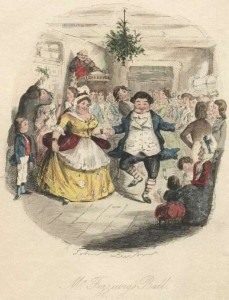 In Charles Dickens’ A Christmas Carol, a ghost grants Ebenezer Scrooge the chance to look back into his past and see a company holiday party that Fezziwig, his employer at the time, threw one year. Scrooge observes Fezziwig and his family, the employees and their families, the apprentices (including himself), the household employees and even some of the neighbors as they prepare, arrive and celebrate.

For nearly four hours this party rages on and on. There was dancing and cake and food and beer and music. Scrooge observes every minute of it with glee. He “acted like a man out of his wits. His heart and soul were in the scene, and with his former self. He corroborated everything, remembered everything, enjoyed everything, and underwent the strangest agitation.”

At the party’s conclusion, he remembers where and when he is and recognizes the Ghost who had brought this long-forgotten scene to him. It speaks:

“A small matter,” said the Ghost, “to make these silly folks so full of gratitude.”

The Spirit signed to him to listen to the two apprentices, who were pouring out their hearts in praise of Fezziwig: and when he had done so, said,

“Why! Is it not? He has spent but a few pounds of your mortal money: three or four perhaps. Is that so much that he deserves this praise?”

“It isn’t that,” said Scrooge, heated by the remark, and speaking unconsciously like his former, not his latter, self. “It isn’t that, Spirit. He has the power to render us happy or unhappy; to make our service light or burdensome; a pleasure or a toil. Say that his power lies in words and looks; in things so slight and insignificant that it is impossible to add and count ’em up: what then? The happiness he gives, is quite as great as if it cost a fortune.”

The lesson is two-fold.

People who want to be together

One lesson is that a company holiday party needn’t be a hugely expensive* and arduous affair. It can be, but it doesn’t have to be. A simple, festive event to which people want to be invited is enough.

Use your management power (and skills) for good

The other lesson is to remind us of the power we wield. The manager “has the power to render [the employee] happy or unhappy; to make [their] service light or burdensome; a pleasure or a toil.”

Yes, you’re in business to make money or widgets or whatever. Whips and other similar inducements have been banned for quite some time and yet there are plenty of other ways to encourage people to produce. Fezziwig was profitable and his employees (and apprentices) happy. They still worked, but it wasn’t a toil or burdensome. They still made money, but they did so with happiness.

When asked to quantify or catalog Fezziwig’s technique, Scrooge only says that “his power lies in words and looks”. These are “so slight and insignificant that it is impossible to add and count them”.

And yet they are effective.

Managers, what can you do—what are you doing—to make your employees’ “service light” and “a pleasure”? Please share with us some simple, effective ideas that you’ve found to bring your employees some happiness, this season and the whole year around.

This entry was posted in Management and tagged Charles Dickens, management, workplace environment. Bookmark the permalink.