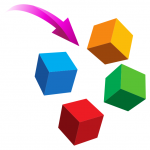 A Leader “shares the vision” with the Team

We spent a good part of a day at the GCC National Youth Leadership Training course last week talking about “Sharing the Vision”.

There was so much presented throughout the week that I doubt many of the 48 participants got more than a high-level introduction to this topic, but it was one of the ideas that struck me pretty hard.

Here’s what I took away from that afternoon.

First: In many teams, a leader “shares the vision” with the team, imparting the vision1 to the team and the team receiving it. It’s very transitive—there’s action as the leader shares (to the team) the vision.

When a leader successfully “shares the vision”,2 each member of the team receives it, understands it and can articulate it. They can almost or may actually be able to see it. And they don’t usually do this by themselves but together, jointly.

There’s a shared ownership, and when we get to this point . . .

A Team (and the Leader) “shares the vision”

Second: As a result, the team “shares the vision”, receiving it from the leader and holding it jointly, sharing it among themselves (and in the best teams, also with the leader).

Sure, there are times when the vision is imparted and the team merely accepts it and might put forth some small effort to achieve it, but that’s a lesser case than this deeper level of “sharing the vision”. It’s not what we were striving for last week.

One goal of last week’s leadership training is understanding a shared vision, one shared (usually) by the Leader to the Team, received by the Team and shared among the Team. Shared in such a way that not just the Leader can see it, but shared so wholly that this vision is what’s dancing around the team’s heads all day long.

And when a team shares a vision in that way, stand back and look out. Something is going to happen.

What about you? Have you ever been on the sending or receiving end of a shared vision in a truly powerful way?

This entry was posted in Leadership and tagged team development. Bookmark the permalink.